If you’re an affiliate I’m sure you’ve heard about Mobidea.

They are everywhere: forums, conferences, blogs, you name it.

They have made a good name for themselves because Mobidea has a great platform to find mobile offers (mobile content, apps, CPL, etc.) for media buyers, publishers and they also have the Mobidea Academy to help you learn the ropes, a tracker and now a traffic source as well.

Yep. Mobidea just launched their own push traffic source in March 2019 and I’ve been testing it to see how it works.

What kind of ads or traffic type is it?

Honestly, it just makes sense as a lot of networks are adding push notifications to their platforms or creating DSPs to sell you traffic from other sources and tap into this kind of new ad type that has been growing in the last couple years. 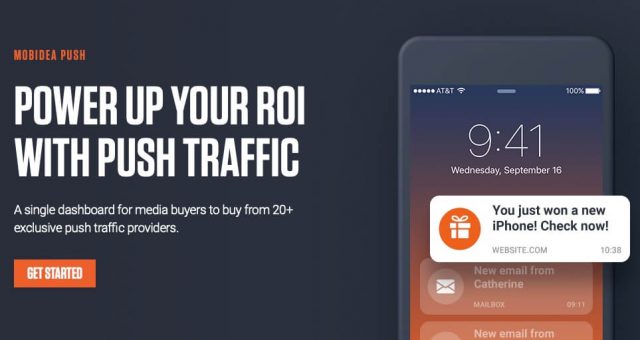 Mobidea connects you with 20+ push traffic providers and they have their own sources as well. With 1 billion daily users and a minimum deposit of $50, it allows people to start running push ads without spending hundreds of dollars, although you should actually spend hundreds or thousands to learn the ropes of any traffic source.

Sign up here for Mobidea Push and get a 10% bonus on your first deposit using the following code: servando10.

If you already have a wallet with Mobidea running their offers you can also use that budget to buy traffic, which could be quite convenient. 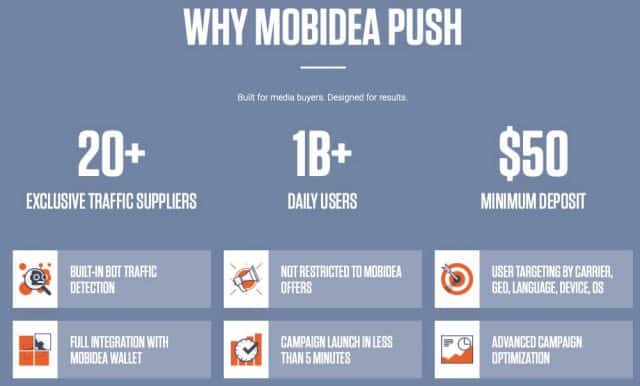 Mobidea allows you to add funds via PayPal, Bank Transfer, SEPA and Paxum with minimum values of $50-250 depending on the payment method. 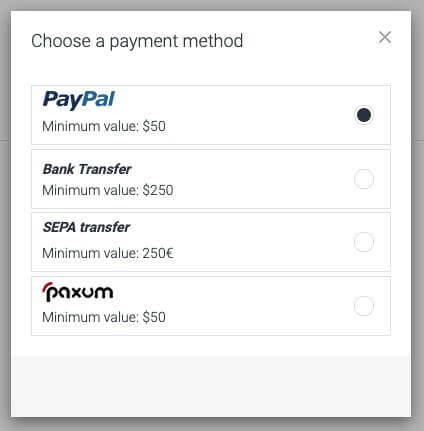 As for volumes, you can see their daily averages, CTR and CPCs per geo in their dashboard

which is constantly updated so don’t take the screenshot below into consideration as the definitive CPC rates & volumes. 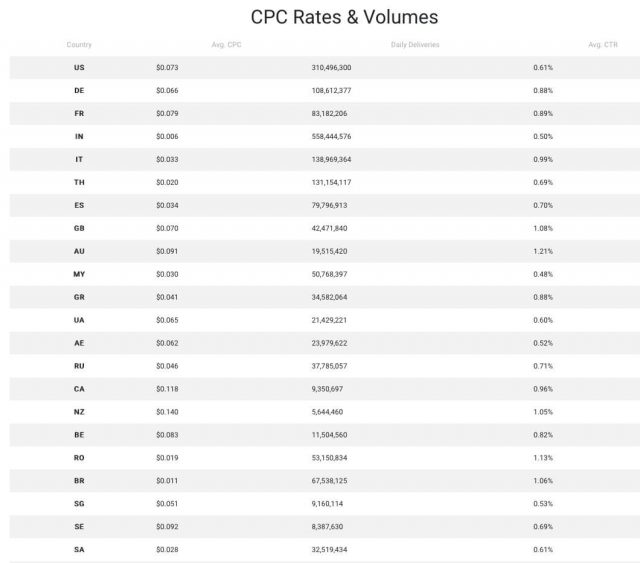 It was interesting to see the volumes available because a lot of push notification networks have more traffic in tier 3 geos like India or Eastern European countries. In the case of Mobidea, the top shows countries like the USA, Germany, and France, which is more similar to other traffic sources like native.

Creating a campaign in Mobidea takes around 5 minutes if you have a tracker and offers available to test.

First, you need to fill up your campaign basic data like name, tracking URL, select a category (only for statistics) and the Geo/device/OS combo. 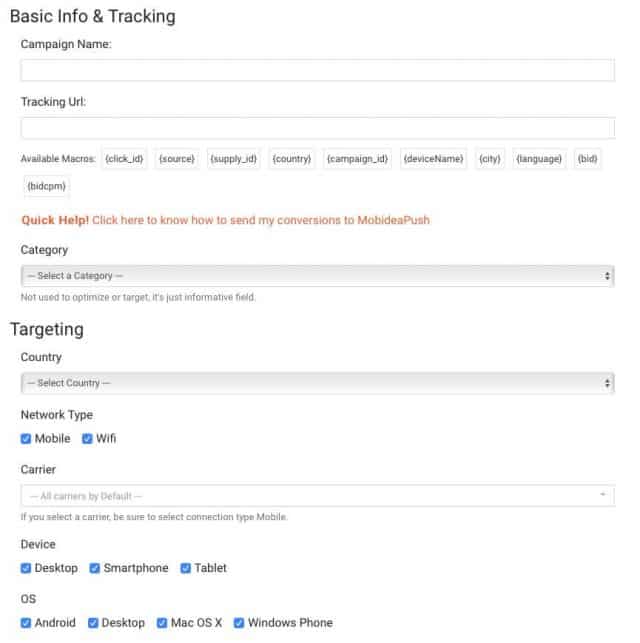 You definitely want to track all of their parameters to help you optimize your campaigns with their available macros. If you’re new to this or you have troubles setting up a new traffic source in your tracker here’s how I do it: 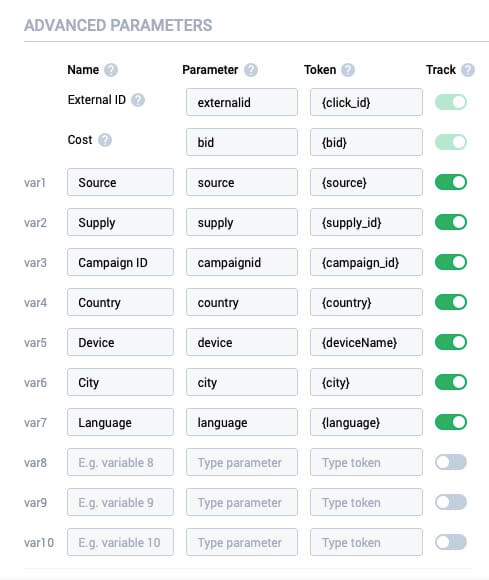 Fortunately, Mobidea allows you to track costs with their {bid} token and they provide all the basic tokens to do optimization with their campaign filters. The {source} and {supply_id} tokens are important as they represent the publishers and feeds that you’re going to blacklist or whitelist after buying traffic. I’ll explain that later so keep reading.

There’s a dropdown menu with Advanced targeting capabilities including cities, languages, and devices (therefore the tokens above) which can be useful and aren’t available in some of the other push notification networks yet. 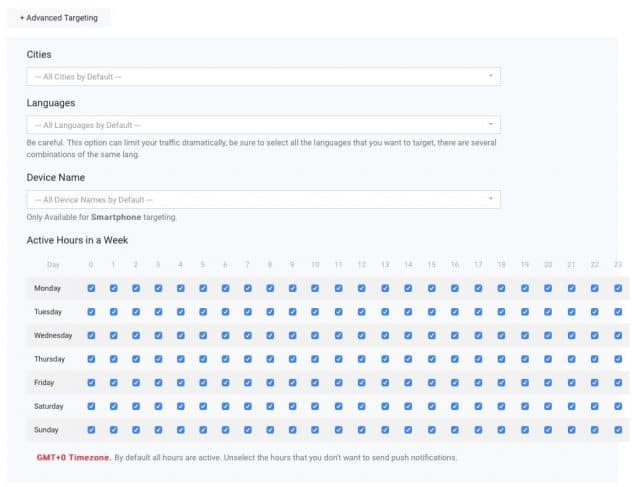 Mobidea has an Audience filter which allows you to target people who have been subscribed to their push notifications for a week or more.

The fewer days they’ve been a subscriber, the more the convert. I recommend staying below 21 days and separate your campaigns by user’s freshness to measure your own results. This feature is similar to the one found in PropellerAds.

Here you can also set a frequency cap and your bid/budget: 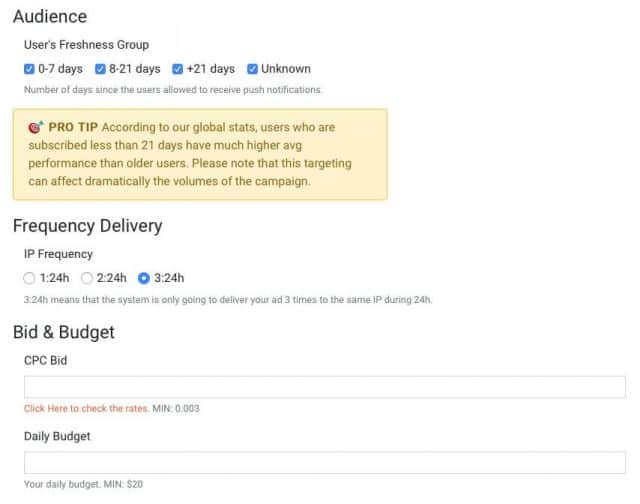 Finally, you’ll get to the creatives area where you need to write down a title, description and upload an Icon for your push notification.

As opposed to some networks you can only upload the icon and not the features image from the expanded notification, but this has worked fine for me in other networks so I don’t really worry much about it. 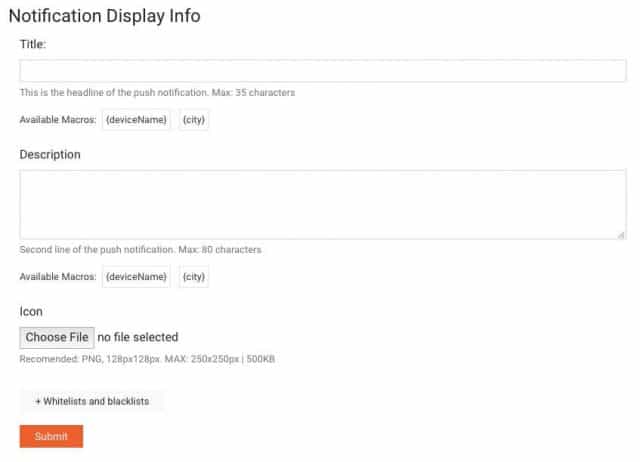 Mobidea has 2 macros (device and city) available for you to use in the text of the notifications. This can help you to tailor the ads for the audience and increase their CTR.

You get the idea…

The only thing I really miss from Mobidea here to make it a more appealing choice is the ability to upload multiple creatives at the same time. Update: Mobidea now allows you to upload and split test 5 creatives!

Push notifications tend to have a shorter lifespan and having several creatives running in the same campaign with the ability to rotate and replace them helps a lot to keep them running for weeks.

The only way to do this now is to duplicate campaigns but this isn’t as convenient as having the feature integrated into the campaign settings.

Sign up here for Mobidea Push and get a 10% bonus on your first deposit using the following code: servando10.

I want to add this quick note about the optimization process in Mobidea because it could be a bit confusing even if it’s written in their documentation.

When you buy traffic from the Mobidea DSP you’re buying traffic from dozens of networks and each network has different publishers/websites.

I’ve seen some people that confuse the feeds and the websites as they think they are the same, but a feed generally is a group of dozens or thousands of websites and not a website alone, so you can’t (or shouldn’t) treat it as a standalone website or you’re going to run out of traffic fast.

To show you an example, here’s a campaign running with Mobidea and the feeds (supply_id token) I’m getting traffic from:

As you can see, there are only 6 feeds sending traffic in this campaign, and the top 3 are the ones sending more traffic.

Now here’s an example of the sources (standalone websites or publishers) that are sending traffic to the campaign:

There are a lot more sources here (hundreds if not thousands) and each one of them belongs to a feed from the picture above.

So, if you’re blacklisting or whitelisting you probably want to do it by sourceID and not by supplyID unless you see a specific supply that’s just performing much better than the rest.

To blacklist/whitelist a supply you need to add them in the following format: {supply_id}-{source}

When you want to blacklist/whitelist a source, you don’t only write the sourceID in the form, you need to write something like 105-32400 (check both screenshots above for reference).

And that’s how it works.

Test Mobidea Push with a 10% Coupon

If you’re interested in buying traffic from Mobidea you can sign up here and use the coupon servando10.

If you’re already buying push notifications in other sources but want to grow your campaigns with Mobidea this is the perfect time to test them.

For any questions or clarifications, you can contact the Mobidea team at onlinemarketing@mobidea.com