I remember it was 3 years ago when I first saw banners of Voluum DSP in an affiliate conference. Back in the time I wasn’t interested much but after a while I decided to approach them and ask what was the DSP going to do.

Since I was running mobile offers only it made sense if the DSP was able to connect me with tons of mobile exchanges although my focus was mostly pop traffic. So, after speaking with one of my managers I got signed up for the DSP beta list during Affiliate Summit East 2016, where the people told me they had more of an alpha product but they would give me access when a BETA was ready to test.

And here I am, 3 years later, testing the new DSP that was finally launched and I’ve been using it for the last 4 months or so. It comes at a good time where Voluum has a price competitive plan against the competitors and they have been adding a ton of new features to their tracker and even launched a new marketplace to find offers.

So, what’s the Voluum DSP about?

A few years ago, I thought the DSP was going to be about mobile display exchanges, but then I realized Voluum got into the native traffic game, which has been booming in the last years although it has kind of slowed down lately. A lot of affiliates run native ads doing massive volume and since I started learning native ads in 2018 I figured it was a good way to put it to test and see the main differences between running directly with the traffic network and running your campaigns through Voluum’s DSP.

I was surprised to see many of the well known networks available already in the DSP plus several other networks that aren’t so well known and even a few ones I had never heard about (always learning new stuff). There are some good traffic sources in there with low competition to grow your campaigns and with very good quality. Some of them are premium sources which means you need to run white hat offers like eComm or Lead Gen in the right verticals.

Here’s a quick view of the traffic available worldwide per exchange: 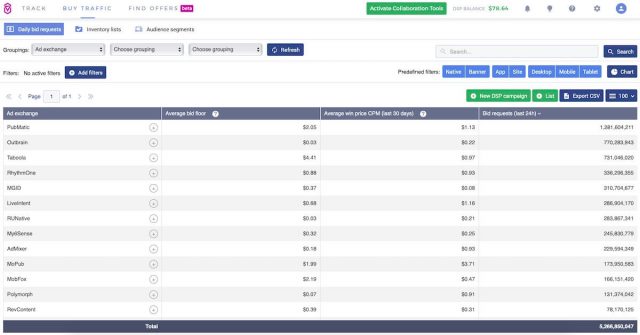 Also, the platform is quite transparent in the way you can filter the volume available. For example. if you wanted to see the traffic available per country in Taboola here are the stats after using the filters:

This gives you a good idea of the volumes and CPMs available for each source and geo. The only thing I’ve been noticing but it keeps improving is that sometimes the CPMs are either too low or too high and doesn’t make sense, but once you launch your campaign you can adjust the bid based on the number of impressions won for every auction.

You can also check each of the websites that’s bringing traffic in the DSP so they’re not coded like with many networks do (e.g. site ID 54722). Although it’s easy to find the real websites behind each widget ID in native networks, it’s good to know it’s all available here from the very beginning.

As for payment methods, the DSP allows you to fund your account via PayPal, CC and Bank Transfers. The minimum deposit is $500 which is fine because for native ads you’ll need a high budget ($5,000+ recommended) to learn and optimize your campaigns.

For my readers there’s a bonus where you’ll receive an extra $100 for your first $1,000 deposit so make sure to click this link to sign up and get your coupon!

If you’ve been running native campaigns you know in some networks the campaign creation process can be a bit slow.

Not only because you need to upload several creatives with different sizes for each network, but also because the teams at many native networks take a few days to approve your campaigns.

When you create a campaign through Voluum’s DSP, your creatives get approved way faster. Sometimes it takes a few hours or less, which is much better than waiting 1-7 days in some other networks unless you have a dedicated manager (and even then, it might take at least 24 hours).

If your campaign gets rejected you’ll get a notification as shown in the image below and if you hover your mouse over the rejected icon you’ll get a message telling you the reason why the creative/campaign was rejected. This is also great considering some networks just reject you after a few days and the reason isn’t clear enough to make changes.

When you’re creating a new campaign, the editor is all integrated in Voluum’s interface, which is nice if you’re familiar with the tracker. In fact, if you only run native ads with the Voluum DSP you don’t even need an external tracker anymore. You’ll get access to Voluum as long as you don’t want to run other traffic sources (there you’ll need to pay for a tracker subscription).

As for the campaign creation process, what I like as well is that you can instantly duplicate and create campaigns for different exchanges and devices (tablet, mobile, desktop) just by creating your first campaign.

For example, if you create a campaign for Colombia in RevContent, you can just enable a switch and have 3 campaigns created instead of just one for each device without having to clone or create each campaign separately. This saves a lot of time.

As for when up upload creatives, you can bulk upload all of your ads and then just add the text/title and resize them properly for each exchange.

Moving to campaign optimization, there’s a few things I’d like to mention here as an advantage against running direct. First of all, you can optimize your campaign directly in the tracker, so all of your costs, creatives, IDs, etc. are block-able within Voluum’s interface. When you’re running a lot of campaigns and you need to move back and forth between the traffic source and your tracker this is something I thank for.

Also, instead of dealing with creative IDs you can see your creatives performance and a thumbnail in the tracker’s interface before blocking them: 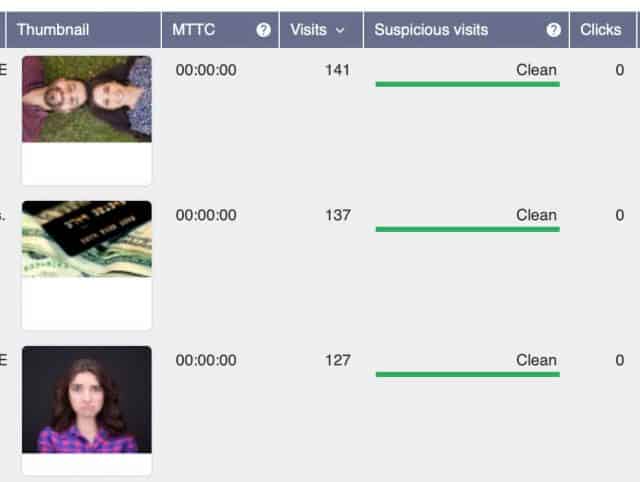 I had mentioned the transparency of the DSP before and I’ll mention it again here. If you filter by sites, you’ll see the URLs where your campaign is getting clicks and impressions, which is quite nice if you want to spy or optimize your campaigns. You can obviously pause all of the sites you need in this interface, as well as adjust the bids, check the number of impressions vs. total bids available and then your regular stats.

While running through the DSP gives you a lot of benefits, I’d like to mention here that I’ve seen not always all of the same sites are available through the DSP as opposed to going direct. In most cases I don’t see a difference but some sites just don’t run through DSP as they want to keep more control about what’s being advertised with them.

My favorite feature of the DSP however is the ability to block/filter your campaigns within 2 or even 3 dimensions. This is something I have been expecting to see in any network for the last years and it’s just not possible without the DSP.

Let’s say I’m buying traffic from boostbox.com.br and I’m getting conversions but the site isn’t profitable in my campaign yet.

Most people would pause this website after a while if they are not profitable after adjusting the bids, but with Voluum’s DSP I can dig in and see which operating systems are getting conversions and which aren’t:

Now that I’m able to see the whole picture, Voluum gives you the ability to block or filter out those operating systems but only for that website in particular. Normally if you pause an OS you’ll block it from all of the websites you’re getting traffic from (A.K.A. campaign wide). However, with Voluum DSP you can do it individually for each website. Isn’t it great?

Here’s another example of this using now 3 dimensions. 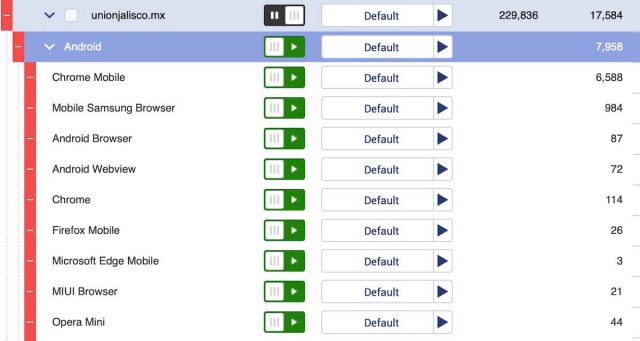 And then move to another OS and block different browsers. This is awesome and allows you to find small pockets of profit that otherwise would go wasted once you block your worse performing OSes and Browsers.

Finally, there’s a couple things about optimization that you can do with Voluum’s DSP as well. They’re found in the optimization area of your campaigns: 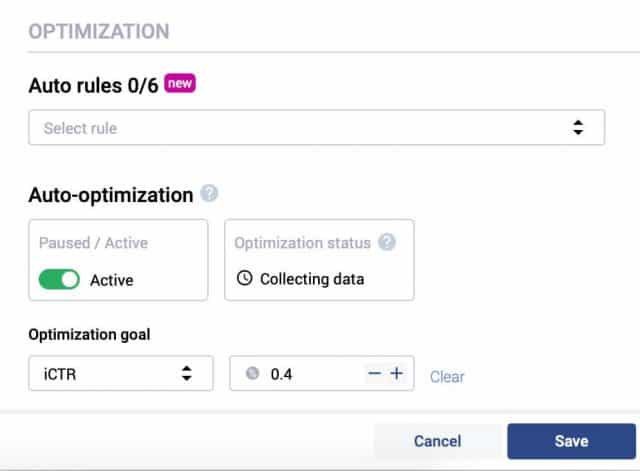 First one is auto rules, which is self-explanatory.

You set a rule to pause either widgets, sites or ad exchanges based on the number of impressions/clicks/conversions/ROI of your campaign. This is a feature some people have been using with external tools but here you can find it integrated without paying extra.

The second is auto-optimization, which works with a machine learning algorithm that improves your campaign based on CTR, CPV or CPC. Since we’re talking about native traffic this means this feature will help you optimize your campaigns to get more traffic and cheaper clicks. It works using all of the dimensions available in your campaign so eventually your traffic could be even cheaper than going direct.

Give Voluum DSP a try

Now that I’ve told you my experience with the DSP would you like to give it a try?

So far, I’m liking it a lot, and the integration with Voluum (and even a free tracker if you’re only buying native) makes it super easy to use and besides the optimization features I like that my campaigns get approved super fast no matter which exchange I run my campaigns with.

Overall, if you’ve been trying to get into the native scene, Voluum DSP is a great way to get started!

And see the klippyo review